The Definitive Guide to Pool Balls 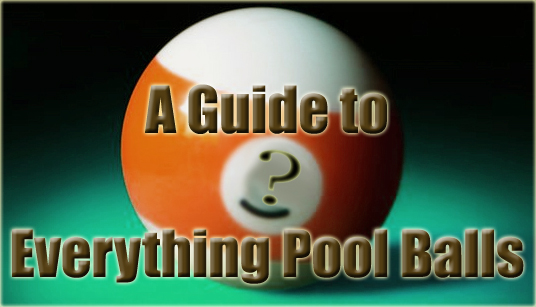 It's a big world, and there's a lot of balls out there, especially when it comes to the game of pool.

Sure, a lot of us may only be familiar with their primary American uses (e.g. use the white cue ball to hit, choose between stripes and solids, get the 8-Ball in last, etc), but some of you may be surprised by the history of the pool ball itself, as well as the varying weights, sizes and colors used in the different forms of billiards out there, ranging from carom, snooker, to what many of us have come to know as the traditional game of eight-ball.

The History of Pool / Billiard Balls:

Since the game's inception in the 15th Century, billiard balls have been made from many different materials, such as clay, bakelite, celluloid, crystallite, ivory, plastic, steel and the earliest form, wood. From 1627 to the mid-20th century, the most dominant of billiard ball material was ivory. The search for a substitute for ivory use was, oddly enough, not for environmental concerns but based mostly on lowering the high production costs and the growing fear for the safety of those poor, sympathetic elephant hunters.

After the reign of ivory, the 1900's brought the first viable pool ball substitute, celluloid. Unfortunately, celluloid only achieved minimal success to due to the fact that it often exploded during the delivery, which many people tend to frown upon. Thanks to the success of brands like Aramith, the most popular material used in billiard balls today is phenolic resin, which is closely followed by polyester and various other polymers.

Many unique variations of the game of billiards have been created throughout the world. Because of this, many different versions exist of the billiard ball itself, all varying in number, type, diameter, color, and pattern. It all depends upon the specific game being played. .

Here's a quick breakdown of the balls associated with some of the world's most popular billiard games.

In the US, the term "billiard balls" generally refers to balls used to play various pocket billiard games such as eight-ball, nine-ball and one-pocket. In the UK, the American version of the billiard ball is referred to as "Kelly pool". In an average game of 8-Ball, Balls # 1 - 7 are often referred to as solids, with balls # 9 - 15 being the stripes. Despite having a similar look, the 8-Ball is set apart from the rest of the solids due to its unique significance within the American game of pool. 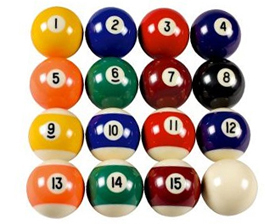 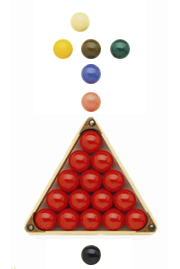 The red balls are racked in a fashion similar to the American game of 8-Ball, with the six assorted colors aligned to specific positions along the table. Once one of the red balls is pocketed, a player can choose to hit one of the colored balls, which are each assigned a different point value. This point value is as follows: 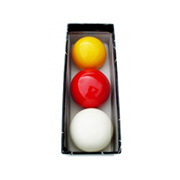 One of the oldest forms of the game, the balls used in carom billiards consist of only 3 colors; red, yellow, and white. The white ball is often engraved with a red or black circle which is meant to aid in targeting.

Carom has traditionally been a unique three-ball game that is actually played on a pocket-less table. The name "carom" itself stems from a shortening of carambola, which was earlier used to describe the red object ball that is often used in many billiards games.

English Blackball (British-Style Balls):
Standard Size: 21⁄8 in (52.5 mm).
This particular style of billiards is played with seven yellow balls and seven red balls. Unlike Snooker or the American game of billiards, all balls on the table are unnumbered with the exception of the 8-Ball, which is referred to in this particular game as "the blackball".

The Brand Names to Look For:

Why are certain brand names important? The answer is simple. Reliability.

Several specific ball properties, such as hardness, friction coefficient and resilience, are all very important to gameplay. We can't stress enough how important playing with a quality set of billiard balls is.

First and foremost, if you only know learn one name in pool balls, make sure its Aramith. While several other respected names such as Elephant and Sterling can be found on the market, Aramith are the only balls made of pure phenolic resin, allowing them to last up to 5 times longer than most other balls, which are often made from polyester and other polymers.

Phenolic resin is a synthetic material featuring qualities that are resistant to chemicals, moisture, impact and heat; making it an ideal solution for applications where painted steel, wood and plastic laminate just wouldn't hold up. These exceptional characteristics have made Aramith a staple in the world of professional billiards, and used in practically each and every tournament played worldwide. 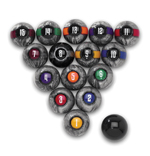 When it comes to custom billiard balls, names like Aramith, Vigma, and Elephant have become the well-respected brands to trust when a player is ready to separate their pool balls from the rest of the crowd. A leader in innovative billiards, Elephant's Beautiful Pool Balls have been featured as the official tournament ball of several ESPN championships, including the Ultimate 9-Ball Challenge and the Women's Tournament of Champions.

Their line of unique products also include their striking Lunar Rocks pool ball set, which was designed specifically for the 2001 Eddie Murphy film, "The Adventures of Pluto Nash".

Another notable design amongst pool balls is the increasingly popular design known as the "TV Ball". These balls (which include the pink and tan variants of American-style billiards) are often used in televised pool games, and are colored differently to make them easily identifiable on television monitors. TV Balls are also responsible for introducing the cue ball affectionately known as "the measle ball", which contains numerous spots on its surface that allow viewers to identify when spin is placed on it.

Transcending the Game - The Impact of the 8-Ball:

Finally, we couldn't do a fully comprehensive guide to Pool Balls without stressing the unique relevance of the 8-Ball. Perhaps the most iconic billiard ball, the 8-Ball is the last ball to be pocketed in the American version of the appropriately named game of eight-ball.

It's name and image of this particular ball transcends far beyond the game of billiards itself, appearing in the form of fortune-telling toys, paperweights, keychains, gag gifts, and unfortunately, slang terms for drugs such as cocaine and crystal meth (which is most certainly not the kind of 8-Ball we sell here at BorderBilliards.com). Its popularity is known to stem from its darker, more foreboding color (which some tend to identify with a unique, isolated personality), and it's familiarity as "the money ball" within the game.

Whatever your favorite type of pool ball is, we wish you the best of luck in finding the billiard balls that are ideal for you, your game, and your individual playing style.