What Pool Cues are Made Of (And Why It Matters)

It’s not the kind of stick you use…it’s how you use it.

In many ways, the above statement is absolutely true. However, it’s undeniable that the choice of materials used in the construction of a pool cue plays a huge role in one’s enjoyment - and ultimate performance – of the game of billiards. 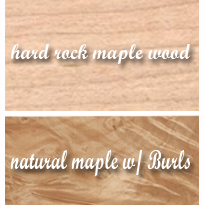 Customarily, a pool cue of exceptional quality is made from a straight-grained hard rock maple wood, especially the shaft. Today, many different types of woods are being utilized amongst cue makers, and continue to increase in popularity. Some of the favorite woods used amongst today's cue makers are Red Ivory, Ebony, Brazilian Rosewood, Cocobolo, Blackwood, Olive Wood, Zircote, Bocote, in addition to a whole slew of other exotic woods.

While certain woodland materials like pine and ebony are very consistent and easy to pinpoint, the appearance of exotic wood can be so varied in color and figuring that even experienced woodworkers have difficulty identifying them.

Oddly enough, Burls - a deformed, wart-like growth on the trunk or root of a tree, are also increasing in popularity, and often used for various cue points and inlays. The popularity of Burls can be attributed to the large number of cue builders that utilize these woods by coring them out and placing laminated dowels inside to strengthen the fragile wood. In fact, there are dozens of woods suitable for use in a pool cue, just as long as they are seasoned and treated in the proper manner.

Despite what some manufacturers might lead you to believe, many of these beautiful woods aren’t even all that expensive.

Warping (and the Alternative):

While there are some cues out there made entirely of materials such as aluminum, titanium, or acrylic, they’re generally frowned upon by the majority of the authentic pool playing community. Many of these non-wood cue sticks (especially the aluminum) can be very sensitive to temperature, and will often bend over time. In contrast, some players insist that fiberglass or graphite cues are a good, cheap alternative to wood, and are less prone to warping and dings.

Still, with fiberglass or graphite, you might be sacrificing performance. A quality wood cue should never warp unless it is subjected to large temperature fluctuations, or improper storage. Basically, if this has happened to your cue, it’s probably because you allowed it to happen by not taking the proper precautions (for more information on this, please see our Pool Cue Maintenance Guide).

To prevent warpage, a quality cue company such as Viking can take four to six months to make just one cue shaft. The cue is slowly lathed down over time, sometimes taking up to 2 months before the next lathing. This elongated process allows the wood to dry, and by the final shaping, the wood has finished the majority of the warping it will do naturally.

The Future of the Craft:

Using the above Viking example, it's easy to see why the process behind the art of cue making is widely known to be long and arduous. The craft itself is a skill that takes years to learn. However, several advances have been made amongst several manufacturers to make the process move much quicker.

Much to the dismay of the older generation of skilled cue craftsmen (and sheer joy of the new guys), the use of machines has aided much in the production of high quality inlays as well as other ornaments. True marks of quality, these exceptional inlays are set perfectly in the wood without a hint of extra space. In addition, they’re also perfectly symmetrical on all sides and clean cut so that all the points are nice and sharp. The woods can be stained to be absorbed into the wood and transparent or painted upon.

Still, as long as the game of billiards exists, the craftsmen behind the cues will continue to thrive. While machines can be a valuable aid in the cue making process when it comes to determining perfect alignment, it's the natural appeal of a handmade product that makes a custom cue so desirable...and much more costly.

The Expensive: Is It Worth It?

When it comes to constructing a high-end pool stick, the fine materials and painstaking artistry of the design can lead to a work of remarkable beauty, in addition to an astronomical price tag. Oftentimes, once a cue reaches a certain level of extravagance, there's a very small chance it will ever see any actual play.

As price tags begin to soar, these highly sought-after collector cues tend to be purchased strictly as just that...collectibles. Occasionally, these cues can reach all the way up to the 100K price range, depending on their limited nature and exquisite nature of their craftsmanship. Once a cue reaches this level of value, it often has less to do with the performance quality of the cue, but the beautiful - and largely unnecessary - added materials included meant to increase it's monetary value.

The blend of superior workmanship and top-grade materials found within these legendary cues can often lead to astronomical prices, but also some of the finest pieces of equipment you'll ever experience. It's up to you how far you want them to go, and if your intention is to ultimately get out there and play the game.

It all comes down to the type of billiards enthusiast you are. Sure, these cues would probably give you the greatest billiards performance of your life, but are you willing to take that risk? In other words, if you have any kids, not only should they go nowhere near it…they probably shouldn’t even know you own it.

In attempts to stay towards the head of the pack, competitors of custom cue makers will often try to make their cues look like they were made out of the same expensive materials used by the pros, and is accomplished by using generic or misleading overlays and decals. Unless you’re easily fooled, it’s fairly simple to tell a decal from the real thing.

In defense of these cues, a decal may deter the cost, but they do not degrade its effectiveness when it comes down to the game play itself. In fact, a decaled cue can oftentimes be the best way to combine high style and solid craftmanship at a low price.

Several of the bigger manufacturers that offer inexpensive decal cues, such as Players and Rage, combine style with genuine, uncompromised quality, and play just as well as a cue that would cost hundreds of dollars more. When purchasing a pool cue, the best way to ensure its quality is to test the cue out and get a feel for its weight and quality, rather than its ornamentation.

If you’re purchasing online and don't have the opportunity to test the product yourself, just make sure you've done your research (hey, it's the reason why God created Customer Reviews).